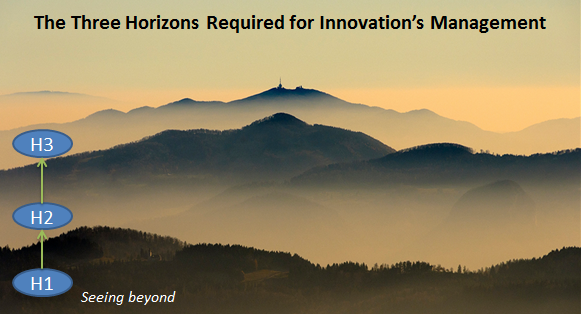 Presently the three horizon model is argued as no longer applying to innovation as it has been suggested, or I feel so, in a recent article written by Steve Blank.

Now I am a terrific admirer of Steve and his thinking but he does, I feel, rush to an assumption to fit one specific problem area, most coming from the start-up world. I apply the three horizons from the more mature organizations perspective and in a much wider lens framing approach than clear he does.

Steve Blank, no less, wrote about the problems with applying the three horizons as his view recently. You can read it here. He changed the title from “the fatal flaw of the three horizon model” to “fast time in three horizon high” mainly due to the push back he received from one of the original creators of this framework. It got even further dampened down into a more observational under “McKinsey’s Three horizons Model defined Innovation for years. Here is Why It No Longer Applies” in a Harvard Business Review posting that digs him further into his specific business focus corner that little bit deeper, as his title assumes.

Steve, I have news for you, the three horizons frame is healthy and fit for use, maybe not in your specific application (although I know it can be) but in multiple applications. I am not sure he decided why he became so dismissive on the 3H. “Fatal flaw, fit for use” can confuse a wider audience, many living off his pronouncements, when the value of this 3H frame is even more compelling today than when it was first proposed. It has moved on, not regressed. END_OF_DOCUMENT_TOKEN_TO_BE_REPLACED

In a recent post over on a dedicated website for discussing ecosystems and platforms, I was discussing the differences between Amazon and Alibaba. I quote “I’d say Amazon are “asset heavy” whereas Alibaba remains “asset light”.

They might be operating at the two ends of the current internet trading spectrum and are coming from different market maturity positions but it is the asset management that is becoming critical for delivering the profit or dragging performance.

Now Amazon is far from “asset heavy” when you compare them to the Industrial companies like GE but asset orchestration is seemingly getting far greater management time for all companies it seems. The lighter you are, the more likely you are to be more flexible and adaptive to respond to more disruptive challenges being faced by industries that are undergoing the shift to being more “digitally enabled”. Alibaba is very much a good asset orchestrator.

END_OF_DOCUMENT_TOKEN_TO_BE_REPLACED 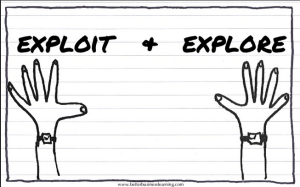 Do we know what are the dependencies and requirements for building and sustaining your organizations innovation success? How do you sustain innovation, is it more through the structuring of everyday work, by creating a particular set of social rules and resources that foster specific routines? Or something different?

We work really hard at maintaining these re-occurring processes, never willing to extend and push them in different and new ways. We have actually become very static in our approaches and learning, we are not learning anew. We often simply end up with incremental innovation that might just ‘nudge’ the growth needle but does little more than sustain us in the present and can be ‘contained’ in a tidy process that makes many, including the ‘bean counters,’ very happy until someone changes the game.

Then we need to think differently but this is usually far too late.. As demand is more volatile today we need to experiment, explore, learn and adjust. What becomes more important is the ‘work to be done’, and how we go about tackling this and not the ‘work done’ where we often simply ‘default too. Surprisingly Adam Smith identified this important difference in work way back in 1776.

END_OF_DOCUMENT_TOKEN_TO_BE_REPLACED

Innovation often fails to align to the strategic needs. This is often not the fault of the innovator, happily working away with no specific guidelines, apart from the general remit of “we need to be more innovative”, it lies in the boardroom that is not communicating the board’s needs clearly enough down the organization.

Building up our capacity to innovation does need to understand and reflect the organization’s business activities, as innovators need to grasp the value creation aspects that will deliver the necessary capital-efficient and profitable growth, and then ‘go in pursuit’ to achieve their contribution into these goals.

Even the basic questions often remain unclear, those of how are we looking to grow revenue, save costs, reduce working capital or improve our fixed capital? Managing our innovation activities can help in all of these. Actually if you ask I expect the CFO would say “all of them” but each does have implications on understanding of the fit and eventual role of innovation’s contribution.

END_OF_DOCUMENT_TOKEN_TO_BE_REPLACED

Option pathways are those viable alternatives available when you are suddenly confronted with the need to change.  By being proactive, anticipating and structuring the options ahead you can be more prepared for disruption, you can respond with more thoughtful reactions. Have you ever considered option pathways?

Having available options so you can react to sudden changes, as more sketched out scenario’s that are representing possible variables, the better prepared you might be to respond thoughtfully.

Preparation for blunting or neutralizing possible attacks, vulnerabilities and changing business conditions is more than helpful, because you have made some investments in different possible options and far more ready to respond in thoughtful ways and not simply in those knee-jerk reactions, simply needing to respond. Considered response, with significant parts already thought through can safe significantly on ill-considered ones.

END_OF_DOCUMENT_TOKEN_TO_BE_REPLACED

The Value of the Three Horizons of Seeing Beyond

Following on from my suggested Common Language approach to the Three Horizons, I would like to outline here its significant value, within any innovation management thinking.

For me, the three horizons have great value to bring together and  map all the different thinking and possible innovation options over changing horizons.

You can frame innovation in alternative ways by using this approach. Innovation has multiple evolution points and working with this framework allows you to significantly improve all of your innovation contributions.

It goes well beyond the present value of ‘just’ fitting your existing innovation portfolio and directional management into a typical one dimensional view of just working in the present.

END_OF_DOCUMENT_TOKEN_TO_BE_REPLACED 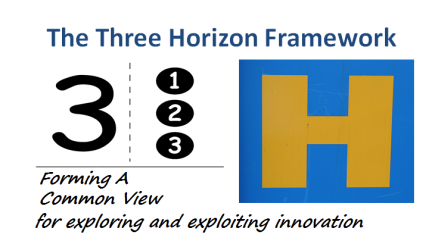 Forming a common view of the Three Horizon for Innovation

As you may know I have been writing significantly around the Three Horizons in relationship to innovation.

Initially drawing on the foundation within the McKinsey initial papers, updated here under their enduring ideas, and in particular based on by its original authors of the book “The Alchemy of Growth” by Mehrdad Baghai, Steve Coley, David White and Stephen Coley

Then I discovered the work of the International Futures Forum, based in Scotland, where a group of members have extended the 3H significantly, well beyond McK’s initial work from my perspective, into a broader, more robust methodology tackling complex problems.

It was this IFF work that excited me, it opened up my thinking to find better ways to deepen the innovation connections and framing that could be suggested in the use of this three horizon frame in exploring and expanding different techniques and approaches.

END_OF_DOCUMENT_TOKEN_TO_BE_REPLACED

We often constrain our innovation because we ‘shoe horn’ any conceptual thinking into a given time, usually the yearly budgetary plan, so it dominates the actions decided and can exercise a large influence in this constraining of ideas to realization.

We should make the case that different types of innovation operate and evolve over different time horizons and need thinking through differently.

We have three emerging horizons that need different treatment for innovation.

END_OF_DOCUMENT_TOKEN_TO_BE_REPLACED

A transition advocate for innovation, ecosystems, and digitalization for the energy and IIoT systems