So we all know a standard company balance sheet has three parts: assets, liabilities and ownership equity. The accounting equation states assets and liabilities are known as equity or net worth and this net worth must equal assets minus liabilities. The balance sheet summarises the present position or last audited position.

Well in the Business model canvas we have the cost side, the back-end, made up of the activities, resources and partnership aspects and a revenue side, the front end, made up of customer segments, channels and customer relationships. It is the ‘net worth’ of all these blocks that makes up their contribution to the Value Proposition.

It is the nine building blocks when we put them together, tells the complete story, a little like a business model balance sheet. Balancing this out thoughtfully does need that bringing it all together, so as to give others the compelling story and begin to mobilise around and attract the necessary resources.

My question though is this: “is the BMC understated at the back-end today and should we strike a different balance for more established organizations?”

What happens when one side perhaps gets over emphasised?

Very much the orientation of the business model canvas is presently skewed towards the front end – the market facing part and rightly so. You are in search of a new business model, you will never find it in the building. As Steve Blank rightly stated “you have to get out of the building” to validate your assumptions or hypothesis, to search for the value in the real marketplace.

END_OF_DOCUMENT_TOKEN_TO_BE_REPLACED

Business model both in new designs and it management have become centre stage in many of our existing organizations’ thinking. The need is not just too simply find new growth through new business models but to ‘react and adapt’ those existing business model designs that are in place, to catch-all the emerging possibilities that are around, hopefully before others do. Are we doing a good job of this at present?

Those without a legacy or are really agile usually are in pole position to explore new opportunities quickly. Also to start with a blank business canvas is exhilarating. It seems we are in the era of the Entrepreneur or are we? END_OF_DOCUMENT_TOKEN_TO_BE_REPLACED 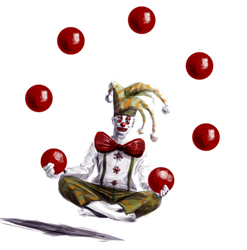 There seems a lot at present going on around the Business Model and formulating its design. Following on from the Business Design Summit held in Berlin in April of this year there seems to be a gathering of momentum surrounding the Business model.

There is an awful lot of designing going on, actually it is hard to juggle with it all, even for me that has a 100% focus on innovation.

The Business Design Summit had as its primary question: “Are the Business Tools you are using relevant for today’s world?”

It went on to ask “If you want to teach people a new way of thinking, don’t bother trying to teach them, instead, give them a tool, the use of which will lead to new ways of thinking”. “Your business ideas deserve better than PowerPoint and Excel”

The momentum is specifically aimed at Business innovation design tools and how to manipulate them and this is giving rise to the ‘school’ of tool-smiths. I wrote about the Business model canvas as set to explode in 2012 and events this year are certainly ‘exploding’ in multiple ways. Let me give some examples: END_OF_DOCUMENT_TOKEN_TO_BE_REPLACED

Strategy as we have previously known it is officially dead. Strategy is stuck! Competitive advantages have become transient. We are facing situations where advantages are copied quickly, technology is just one constant change, and our customers seek other alternatives and things move on faster and faster.

In a new book written by Rita Gunther McGrath, a professor at Columbia Business School in New York and one of the world’s leading experts on strategy, she has been exploring the changes rapidly taking place called  “ The End of Competitive Advantage: How to Keep Your Strategy Moving as Fast as Your Business”

“Strategy (in the past) was all about finding a favourable position in a well-defined industry and then exploiting a long-term competitive advantage. Innovation was about creating new businesses and was seen as something separate from the business’s core set of activities.” “Sustainable competitive is not just ineffective, it’s actually counter productive” says Professor McGrath.

She rightly states:“Think about it: the presumption of stability creates all the wrong reflexes. It allows for inertia and power to build up along the lines of an existing business model. It allows people to fall into routines and habits of mind. It creates the conditions for turf wars and organizational rigidity. It inhibits innovation.

END_OF_DOCUMENT_TOKEN_TO_BE_REPLACED

Irrespective of the organization, we all struggle with transformational innovation. So often we are simply comfortable in our ‘business as usual’. We gear performance to the short-term, we put the emphasis on the current fiscal year, and we support the core business in numerous ways, usually with lots and lots of incremental innovation, so the results are realizable in this year.

We are sometimes comfortable or confident enough to move into adjacent areas, to expand and feed off the core but these are less than transformational in most cases. This space is the one we are the most comfortable to work within, this is the horizon one of the three horizon model approach outlined to manage innovation across a more balanced portfolio of investment.

In summary, the three horizon model for innovation is actually a reasonably simple idea: with Horizon One (h1) being the current business focus, Horizon Two (h2) being more the related emerging business opportunities and Horizon Three (h3) being those that are moving towards a completely new business that can have the potential to disrupt the existing one.

The complexity lies underneath this simple idea, you need to manage these different horizons with completely different mindsets. You need clear well-structured ways to extract the real return from managing a comprehensive innovation portfolio based on knowledge, experience, intelligence but exploring plenty of the unknowns about the future and openness to get you there, as ready as you can be . Its necessary today.

The seeds of destruction lie in horizon one

END_OF_DOCUMENT_TOKEN_TO_BE_REPLACED

I gaze through unbelieving eyes at the continued rise of unemployed in Europe. Unemployment in the Eurozone has reached another record high with the seasonally-adjusted rate for April  2013 going to 12.2%, up from 12.1% the month before according to the European Commission’s statistics office, Eurostat: 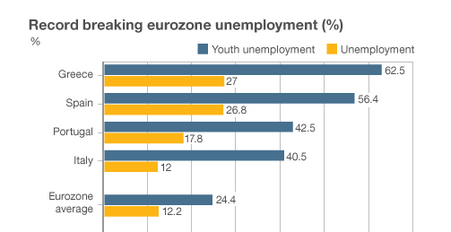 An extra 95,000 people were out of work in the 17 countries that use the Euro, taking the total to 19.38 million. Both Greece and Spain have jobless rates above 25%. The lowest unemployment rate is in Austria at 4.9%.

Youth unemployment remains a particular concern; you simply have to wonder what we are storing up in the longer term with this situation. Can the youth ever catch up, can our society as it is positioned give them the opportunities to turn today’s grim world into a world of optimism and contentment, or is it a lost generation?  In April, 3.6 million people under the age of 25 were out of work in the Eurozone, which translated to an unemployment rate of 24.4%.

Why does this issue of growing unemployment seem to be drowned out by events that seem important on the day but realistically pale in their significance against something as damaging as this present crisis?

We are facing significant society challenges. These include declining Economic competitiveness, deepening Social inequalities, rising Mental ill-health, increasing Crime and social disorder and we see growing Alcohol and drug abuse, to name some of the issues being increasingly tackled as part of the consequences of these tough economic and social times.

We must increasingly recognise that the cost of deferring concerted action to confront these growing set of social challenges is beginning to rise – and could easily outpace our ability to respond.

Can we afford to wait? There are so many pressing questions. END_OF_DOCUMENT_TOKEN_TO_BE_REPLACED

A transition advocate for innovation, ecosystems, and digitalization for the energy and IIoT systems